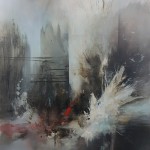 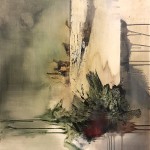 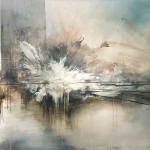 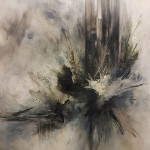 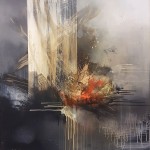 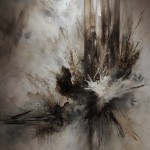 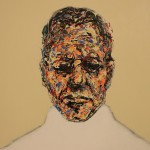 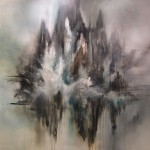 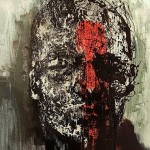 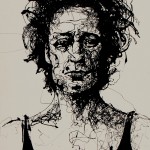 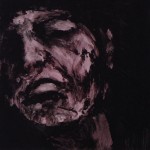 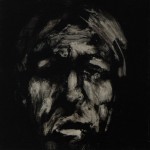 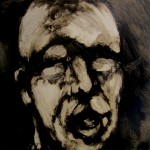 Her work is as explosive as the powerful sound of her name. The vertical column as a leitmotiv slices the canvas in two. She accentuates that imposing ‘column’ with rags or rough brushes. At the point where the verticals meet the horizontal axes, a whole new material eruption occurs. Paint splatters in random, unforeseeable directions. Is the artist at a crossroads in her life or her oeuvre? Which road do we travel down as makers, as human beings? Doubt and uncertainty evoke intense emotions. Her strokes are cries of hesitation, but also of forcefulness and rebellion. This revolt emerges from her soul and finds expression in an unconscious spontaneity. Oil or acrylics (and at times ground coffee) are applied, very much diluted, onto the canvas that lies flat, which allows for a complete absorption, without obstacles, into the act of painting. Just like the Action Painters, she barely sketches, does not base her work on photographs, but instead responds to the unfettered intuition of the moment. Her strokes evoke lyrical-abstract painters like Wols and George Mathieu. They also used an innate, idiosyncratic language of forms that were splashed onto the canvas in impulsive marks. No wonder they were also called “tachistes”. And, without thinking it over, Melloul also paints emotions out of her system. Through that activity she sublimates her shadows and keeps her demons in check. They are imprisoned and brought to a state of rest in the balanced composition of perpendicular lines. This is also why she likes to work at night, when all is dark and she is alone with her state of being. Her recent work is the outcome of a quest to reflect on her own human condition. Even when she is also making figurative work, you can still detect similarities in style with the abstract work. The spontaneous gesture, instilled with a sense of revolt, is the driving element in her oeuvre. What remained restrained in her realistic ballpoint pen portraits, finds its way out in her ‘dripped’ faces, only to emerge in full exuberance in the contemporary, abstract work. Melloul continues to toil and chase her demons, until she can bear to live with them. Here, the process of painting facilitates her quest. Through her work, the viewer can find him or herself confronted with their own feelings which may also, in turn, enable their own catharsis.